What Happens When Elance and oDesk Merge?

One of the questions I've raised before is “Which is the better freelance site, oDesk or Elance?” That is of course not a very easy one to answer. For one, they both have their unique qualities that one would prefer than the other. It never came to mind what if oDesk and Elance will merge into one freelance site just like what Freelancer and it's acquisition of smaller sites like Scriptlance. 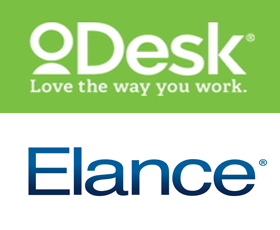 But truth is, there's no more speculation about the merge because oDesk and Elance have already broadly announced the deal for the merge. In an email that was sent out today, oDesk CEO, Gary Swart noted a couple of things about the merger:

Why, then, are we putting the two companies together?

The answer is pretty simple: we think we can do a better job for you this way. Both companies are inspired by a similar vision of delivering the best online work experience possible.

The merger has not yet closed, but here are the kinds of things you can look forward to:

What to expect in this merge?

Once the deal is formally closed which is expected to happen in the next 4 months, a new name for the company is also expected to change. Will it be oLance, LanceO, DeskLance? Well, I don't know. What do you think?

While there is a fear of the merge because Elance charges fees for membership, the announcement assured that they will continue to operate as separate, independent services. This means, as a freelancer, your profile and work history and other aspects of your online reputation will not be affected. The same goes for clients, they will still be able to hire, manage and pay exactly as they did in the past.

Company leadership matters a lot, not just for oDesk employees but also for the freelancers using their service. With the merge, oDesk CEO Gary Swart says that “I’ve decided that after the merger closes I will step aside and hand the reins of the merged company to Fabio Rosati, Elance’s CEO. I will remain involved as a strategic advisor. We have been spirited business rivals over the years, but I have always respected Fabio.” Fabio Rosati has led Elance where it is now and he surely has a vision for it to be the leader in the industry. With this new change, oDesk executive chairman Thomas Layton will continue in the same role at the combined company, and Elance CEO Fabio Rosati will serve as chief executive officer.

Here are a few comments I've picked up about this merger.

I hate how Elance charges freelancers to work, so this announcement fills me with dread at the thought of that “innovation” possibly coming to oDesk.One of the reasons I use oDesk is because it's NOT Elance, and the combination of the merger and Elance's CEO taking over cannot be considered good news from where I sit.

Elance charge a lot when you withdraw your salary, and it will take a week to received it. WITH oDESK, I can withdraw my salary within 3 days. Hope it will not affect the way Odesk send payments to freelancers.

I too hate how Elance charges freelancers to work, like paying the percentage isn't enough. AND we get to pay to take tests on Elance. Why? Because they can get even more money, that's why. It's not like there's a human grading the exam. This is bad news. Like when vWorker went away.

What are your thoughts about the merge? Do you consider it to be beneficial in the long run? Do you think Gary Swart stepping aside as CEO will have a negative impact in the way oDesk is being run?

About the Author: Florante Valdez